The arrival in 1761 of men from Fraser's Highlanders Regiment at La Malbaie.They were amongst Canada's first Scottish settlers. (Courtesy Library and Archives Canada C-040583)

There are many misconceptions about Scottish emigration to Canada. Some commentators prefer the stereotype of the impoverished Scottish emigrants being forced to emigrate. They were always the helpless victims of economic destitution, landlord oppression and government heartlessness. However, the reality was quite different. Most emigrant Scots left of their own free will and financed their crossing themselves. While there was some compulsion, particularly during the period of the infamous Highland Clearances, the main driving force was economic self-betterment. Far from being powerless victims, most emigrants planned their departure carefully and were highly knowledgeable on the economic advantages which Canada offered. Here is a summary of some of the key points: 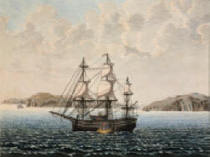